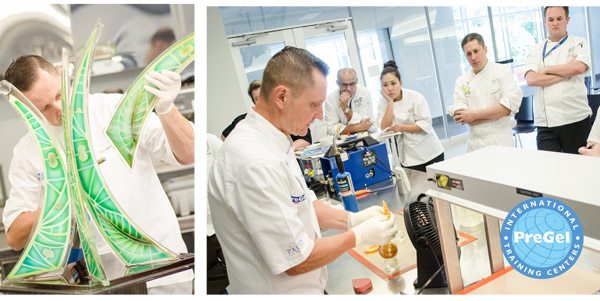 Chef Branlard started the seminar with an in-depth look at various components used in creating sugar showpieces. He explained the importance of structure and how to achieve a strong showpiece with simple elements such as spheres and arcs. The diagram of the showpiece being built during class was reviewed, and each component was discussed and analyzed. Attendees were then able to break off into groups of two and design their own sugar showpiece using similar techniques seen from Chef Branlard.

Chef Branlard demonstrated unique uses for stencils and airbrushing effects that can elevate the visual appeal of a showpiece. Attendees made a variety of stencils and applied these techniques to pastillage pieces that were used in the construction of each showpiece.

Many other techniques were demonstrated during the three-day seminar, including the use of clay and plastic wrap to make basic mold shapes for petals and small animals. Pulled sugar techniques were practiced with the creation of sugar ribbon and flower petals.

Chef attendees came from all over the U.S. and represented a variety of businesses including hotels, country clubs, and private businesses. The seminar concluded with a beautiful display of the sugar showpieces.