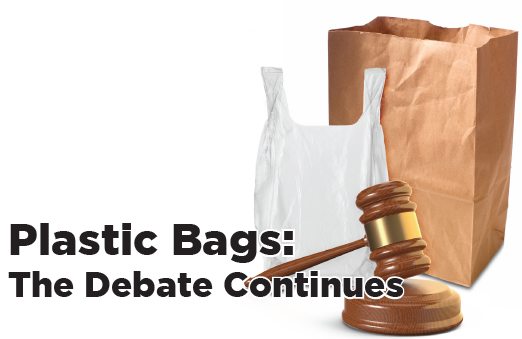 Paper or plastic? Bring a reusable bag or buy one for every grocery shopping trip? How good are the reusable options? Customers and retailers around the world are asking these questions as retailers take a stance on bag preferences.
Sustainability has become a major concern to many companies, not only out of a desire to save the planet, but also because customers have started to gain awareness of its consequences. Consumers have finally stated to realize that certain actions and habits should be altered in an attempt to minimize negative impacts on the planet.  For some customers, whether or not a company is sustainable can be one of the primary factors taken into consideration when making purchasing decisions. Experts call this scenario “green purchasing.”
The good old shopping bag is seeing various changes across the nation.
In response, supermarkets, grocery stores, and other retail companies have begun to make changes in their stores by replacing non-environmentally friendly materials and products with recycled, degradable and plant-based raw materials. One of the public’s most familiar items seeing changes is the good old shopping bag.
Plastic Bags
Plastic bags are the most commonly used bag at retailers. Plastic bags take a long time to decompose when they aren’t recycled and are thrown into nature. According to “The Life Cycle of a Plastic Bag” map, created by Erica Stivison, it is estimated that a single plastic bag can remain for 1,000 years before it completely disintegrates. In addition, bags are commonly thrown in waterways, such as lakes and seas, each year causing the deaths of more than a million sea birds and 100,000 other species of sea animals, such as dolphins, seals and even whales.
Even more startling, it is estimated that Americans use 100 billion plastic bags every year and only one percent of them are recycled, while 98 percent go to waste. The average plastic bag is used only twice prior to being discarded. The average duration that each bag is used is 20 minutes before it goes to waste. The petroleum used to produce 14 plastic bags could fuel a regular car for an entire mile. All of this adds up to future environmental problem for thousands of years to come.
Reusable Bags – Paper & Fabric
Reusable bags are commonly associated with a positive image, as an item that will help save the planet. However, having the bag itself without using it properly can be more harmful for the environment than single-use plastic bags. The Wall Street Journal reports a few interesting facts about the materials used to make these bags in the article “An Inconvenient Bag.”

The article, “What Should be Done About Plastic Bags” released by BBC News, speaks further on the issue of the number of times reusable bags should be utilized. Paper bags require a larger amount of carbon to be manufactured and transported than regular plastic ones, therefore if a plastic bag is used once, the paper needs to be used at least three times more to compensate. Still on the carbon issue, the plastic “bag for life” needs to be used four times, and cotton bags must be used 131 times. Additionally, poor quality reusable bags that rip and break result in less usage and are need for replacement. They also take even longer than the single-use plastic bags to decompose because  of density.
Another interesting fact in a survey applied by the Stanford Graduate School of Business; most customers say they would try to avoid carrying a reusable bag containing certain retailer’s brand when shopping at its competitor’s store.
There is also a sanitary issue with reusable bags. Studies from The University of Arizona and Loma Linda University released in 2011 show that food borne illnesses start at home, so the reuse of bags opens up the possibility of cross-contamination of foods. The researchers tested random reusable bags made of polypropylene collected from customers approached at grocery stores. Ninety-nine percent of these bags carried bacteria and 12 percent of them had E. coli, which can be fatal. E. coli is a germ that lives in the digestive tracts, and it can become infected upon  contact with feces.

The good news is: the study also showed that washing bags in a machine or by hand killed 99.9 percent of existing bacteria. The bad news: only three percent of the people stated

that they washed their bags. On top of it all, 75 percent of consumers do not separate bags for meats and vegetables, and some would also use the same grocery bags to carry clothes, books and even biking supplies, bringing different types of bacteria to the same bag that was already contaminated. In this case, the problem is not only in the bag itself, but also people’s habits. Single-use plastic bags are often reused for different purposes after carrying groceries home. Many people re utilize them as liners for trash cans and to pick up after their dogs, which is already more use than that old “sustainable” bag some have had in the back of their closets for years. If the disposable grocery bags are not available for these actions, clients end up having to buy plastic bags for them, which doesn’t help the cause either.
The Government Gets Involved
Individual city governments and their authorities have become aware of the impacts in nature caused by wasted single-use plastic bags, and they have started to create new rules and laws to try to combat the consequences. A few cities in the U.S. have already banned plastic or other type material bags from retail establishments. Rules vary by city. Here’s a look at some of the current cities with plastic bag policies:
San Francisco: San Francisco banned plastic bags in supermarkets and pharmacies in 2007. In 2012, the law was extended to all establishments. Stores must carry eco-friendly single-use bags and reusable bags at a minimum charge of $0.10 cents and the profit stays with the business, according to the SF Environment Department.
While San Francisco’s ban showcasing reusable bags can lower the environmental impacts caused by wasted plastic bags, the negative effects of reusable bags surfaced shortly after the ban. In 2012, a study by University of Pennsylvania and George Mason University was released reporting that from the start of the ban until the end date of the study, there was an increase in potentially fatal E. coli infections. The same study also observed a 46 percent growth in deaths from food poisoning in San Francisco in that period. Reusable bags are believed to have contributed to an increase in these sicknesses, demonstrating a different threat of unsanitary food handling.
Los Angeles: The Wall Street Journal article “Becoming a Bagless Lady in Los Angeles” states that the most recent ban enacted in the U.S. began on January 1, 2014, making Los Angeles the largest American city to adopt the cause. City law now requires a $0.10 cent charge per carryout bag in grocery and large retail stores, and profit is also retained by the store. According to a report sponsored by the Los Angeles Bureau of Sanitation, two billion single-use plastic bags were utilized annually in the city before the law  was implemented.
Seattle: According to the Seattle Public Utilities Department, Seattle has banned plastic bags completely since July 2012. Paper bags are still allowed but under the $0.5 cent charge (also kept by the business) for each one that customers might need.
Washington, DC: The nation’s capital outlawed free plastic and paper bags in all businesses that sell food or alcohol back in 2010, according to the government website www.green.dc.gov/bags.  A $0.05 cent charge is applied to each bag customers need. $0.01 cent of the profit on the bags is retained by businessowners, but it can be $0.02 cents if stores offer discounts to customers who bring their own bags. The remaining amount is reverted to The Anacostia River Clean Up and Protection Fund, which helps combat pollution.
Other regions have passed bills regarding the use of plastic bags, but the decisions have yet to arrive.
California State: California’s state senate is analyzing the approval of a bill proposing to charge the same $0.10 cents charge applied in San Francisco and Los Angeles for plastic bags in convenience stores, pharmacies, liquor stores and grocery stores in the entire state. According to The Wall Street Journal’s article, “The large stores would also need to provide recycling bins for the bags made of materials that begin with the prefix’poly,’ because even though they are eco-friendly, they can carry bacteria and can only be used so many times before increasing the risk of disease.
New York City: The Wall Street Journal released the article “10 Cent Grocery Bag Fee Proposed in New York City,” stating that The Manhattan City Council is analyzing a bill that asks for a $0.10 cent charge for every paper or plastic bag used in retail stores. The amount would be kept as profitfor the storeowner. Residents of NYC use 5.2 billion single-use plastic bags annually, which costs the city $10 million every year to ship used bags to landfills, according to the bills’ supporters.
Businesses Are Also Taking Initiative

In addition to the laws created regarding plastic bags, retail companies have started to take action creating their own incentive programs for customers to lower the use of the plastic bags. Trader Joe’s, a California-based chain of grocery stores, mainly uses paper bags in their stores, but they still carry the plastic ones, in case a client requires them. A local Trader Joe’s store attendant explained that, in an effort to optimize efficiency and utilize as few bags as possible,employees are trained to fit as many products as they can in each bag – “it’s like playing the game Tetris,” she explains. The chain also provides a “program” regarding bags. In a few of their stores, raffle tickets are given out to customers who bring in their own bags. The raffle happens once month, but there is also a winner named for each week of the month. The prize is a $25 gift card that the client can use at the Trader Joe’s store.
Target, the second largest discount retailer in the U.S, predominantly uses plastic bags. However, they sell reusable bags and there is a program where the store offers a $0.05 cent discount on the customers’ final purchase amount for each reusable bag used instead of plastic. Harris Teeter, a North Carolina grocery chain well-known in eight states of the U.S., also has their own rules on bags. According to the company’s website, the plastic ones provided by their stores are 100% degradable, and the paper bags are made of 100% recycled materials.
So paper, plastic or reusable? The verdict is still out. Ultimately, as a business and consumer, weighing the options on cost, social responsibility and personal preference is the first step.Sticking to your decision and educating your customers is  the next.