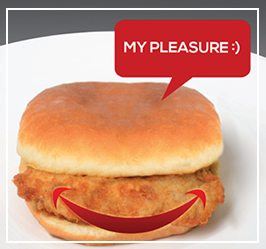 For the Quick Service Restaurant (QSR) Industry, offering superior customer service seems to be a tricky equation to solve. The nature of the QSR business model makes it challenging, since patrons expect quality food in a prompt manner at a reasonable price. In the rush hours of the day, these basic tasks seem challenging enough, and as a result, all the extra details that make for a superior customer experience go out the window quite quickly during day-to-day operations. Extra details such as opening doors, going around the restaurant offering refills, picking up trays from customers or simply offering a genuine and kind smile is what Chick-fil-A calls “going the second mile.”  This mantra is ingrained in the company’s DNA making it an outlier in an industry with low standards for customer service, making Chick-fil-A the company that is setting the standard for a new approach.
To put Chick-fil-’s results into perspective, the chain has less than five percent tun over rate among store operators, whereas the fast food industry average is 35 percent. Most Chick-fil-A operators stay withthe company for more than 20 years. Regarding hourly workers, Chick-fil-’s turnover is 60 percent compared to the industry’s 107 percent. In addition, the company’s customer service is a frequent visitor to the top of customer satisfaction lists. In 2012, the company won Consumer Picks “Top Limited-Service Restaurant” in the Chicken Category. In 2011, it received the honors for QSR magazine “Best Drive-Thru in America” as well as Zagat’s Fast Food Survey’s “Top Large Chain.”
Somewhere along the way, it has become acceptable that store operators will be grumpy, hourly workers will be hard to manage and patrons shouldn’t expect anything more than a business transaction when they step into a fast food joint.  Somehow, the Atlanta-based company has managed to challenge this paradigm with its “second mile” customer service program. If the first mile consists of serving a quality product in a prompt manner at a reasonable price, the second mile “ups the ante.” According to Dan Cathy, president of Chick-fil-A, as he explains in the Cathy Family blog article called “The Second Mile,” “It’s the above and beyond. It’s helping mothers with children to their tables, refilling drinks, engaging in conversation and opening doors for customers (at a fast food restaurant!) It’s an authentic smile, and it is absolutely ‘my pleasure.’” He adds that, “Going the second mile means living out the Golden Rule and putting others before ourselves in a world that is all too often about ‘me, me, me.’”
The company trains employees to take the trip to the “second mile” by considering that every life has a story and therefore employees should always show compassion and provide superior service. The message has a well-produced video named “Every Life Has a Story” that can be found in the company’s President Dan Cathy’s YouTube Channel. It’s a touching and powerful message that challenges the current modus operandi of every fast food establishment since it invites businesses to slow down for a minute and consider that everyone we come in contact with throughout our day may be going through some difficulties, and therefore could use a kind smile and a little appreciation.
So, how can more QSR’s reach the customer service “second mile?”
Solid Partnership with Store Operators

According to a Businessmart.com article “How Much Does a Chick-fil-A Franchise Cost?” the initial cost of starting a franchise with the company is quite low in the industry, with only $5,000 as an initial fee. In addition, it pays for the land, the construction and the equipment. It then rents everything to the franchisee for 15 percent of the restaurant’s sales plus 50 percent of the pretax profit remaining. Chick-fil-A takes a considerable amount of the profit at 65 percent, since most franchise companies take 8-10 percent of gross sales. However, initial fees of other franchises are also considerably higher. The company sees this as providing a guaranteed formula for success for ambitious individuals who may not have access to huge capital to start a business. In return, the company expects loyalty and compliance. It’s unlike other franchise models since it almost runs as a corporate partnership. However, Chick-fil-A only selects around 75 out of every 10,000 applicants, and store closings are almost unheard of. By being more involved in business decisions and fostering a solid relationship with its operators Chick-fil-A has found a model that works to keep up quality and customer service.
Caring and Empowering Employees

Chick-fil-A is an example of how to go beyond the QSR industry standards. The company states in its corporate website press room, that in order to encourage restaurant employees to realize their potential it offers a Leadership Scholarship Program with $1,000 scholarships to qualifying employees to the school of their choice. Glassdoor reviews don’t lie either.  “Pay is above minimum wage, generally great co-workers, managers truly care about employees. They stand by their morals and values,” stated a crew member from Burlington, NC. Overall many of the reviews praised the flexible schedule and the positive working atmosphere, which is essential to low turnover.
According to new research out of the Wharton School and George Mason University and referred to on  Inc.com in the article, “Secret to Low Turnover? A Little Bit of Love,” employee groups that show compassion and caring tend to result in higher job satisfaction.  With a strong culture and high emphasis on values, Chick-fil-A has managed to provide a positive atmosphere in one of the most difficult industries and has attained an unusually low turnover rate as a result.
Walking the Walk When It Comes to Corporate Values

Although every company has some sort of mission statement and corporate purpose, few live by those values like Chick-fil-A does.Although some may be polarizing and politically incorrect in some circles, it is admirable how the company has stuck to them through decades. Some of these are illustrated in Dan Cathy’s Leadership Toolkit found on the Cathy Family blog. He tells a story using different items on how he leads the company.
For example, his toolkit includes a side towel, an item used only by staff in fine dining establishments that represents the superior attention patrons receive there and how specially they are treated. Cathy explains how that gesture should be applied in everyday life, whether it’s at the counter of the store or the manager’s leading with his or her employees.
Another great example is the oxygen mask, an item found in airplanes. In case on an emergency you should put one on yourself before helping others. Cathy explains that quite often in difficult times leaders need to take care of themselves in order to be able to take care of the situation. A great example is the company’s policy for closing on Sundays – forgoing revenue in order to provide a day of rest for operators and employees. Counter-intuitively, however, Chick-fil-A claims to generate more revenue in six days of business than many other establishments in seven.
QSRs that are looking to improve their customer service should note that such a change can’t be an isolated improvement, it should be an integral effort that runs from top to bottom in an organization. A set of policies is not going to make a dent compared to the DNA-engraved, services-oriented values that Chick-fil-A lives by. Nevertheless, consumers hope that more food establishments accept Cathy’s invitation to join them in the second mile. “If you want to make a difference, step over the line and into that second mile, because magical things happen there,” stated Cathy. “There’s joy and fun and reward in that second mile.”