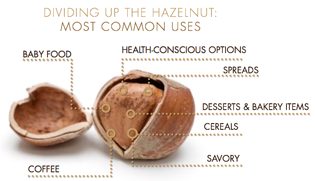 You can find them in coffee, ice cream, chocolate delicacies, flour, oil or as a spread because hazelnuts are all the rage and making their way into a multitude of our daily consumables. Alone or mixed with chocolate, the hazelnut is being incorporated into popular food products and dishes in all facets of the food industry, and if the industry is getting nuts about it, there must be a good reason.

Famously known by the name of “hazelnut,” the Filbert is the true name of the tree and the nut. Brought to the U.S. by French settlers back in the 1850s, the first cultured tree was planted in Oregon. Some speculations exist about the origin of its name; Filbert or “full beard” both reference the husk that entirely covers the nut in some varieties or St. Philibert, the name of a French settler who may have been responsible for its introduction to the states. In 1905, the Oregon Filbert Commission decided to conform to the common name of hazelnut we now use today.

The hazelnut in Europe is like the peanut in the U.S., but maybe not for long. After successfully conquering the European market, the little brown nut has begun to make its way overseas to offer American consumers its delicious and healthy attributes. The best example of this is the popular chocolate and hazelnut brand Nutella®. Nutella® was first imported to the U.S. over 25 years ago in 1983 and was initially distributed in the Northeastern part of the country. The popularity of Nutella® has grown incredibly over the years, and it is now available across the United States. In addition to Nutella®, there are now three new chocolate-hazelnut spreads on the retail market: Jif’s Chocolate Flavored Hazelnut Spread, great for filling and frosting cakes; Justin’s Chocolate Hazelnut Butter, with an intense nut flavor and grainy texture; and Nocciolata Organic Hazelnut Spread with cocoa and milk that is not too sweet but works great as a Nutella® replacement in recipes. Ingredient manufacturers are also including the nut in its many product lines for foodservice. Foodservice companies such as PreGel have over 10 different hazelnut and hazelnut-chocolate ingredient varieties for its customers. The hazelnut’s sophisticated taste has been successful in boosting its popularity, yet its health-conscious tendencies also make it one of the top nuts to consume.

Based on its retail success, many facets of the food industry are taking advantage of this new nut in the market. In the baby food market, researchers from the University of Georgia found that hazelnut oil could be the new form of fat for bottle-fed babies who won’t benefit from the nutrients found in mother’s breast milk. The nut can be taken as a nutrient during the last three months of pregnancy because it contains healthful omega-3 fatty acid and DHA that are both important for the babies’ development of the brain and other organs. Rich in protein and unsaturated fat, the hazelnut contains significant amounts of vitamin B1 that help produce energy. For consumers who are following the wheat-free and gluten-free diet trend, hazelnut flour can be a great baking option. Its butter-rich quality makes it a perfect ingredient for crumble toppings or pie crusts.

In the flavored coffee market, hazelnut coffee ranks among the most popular flavor choices ranging between Vanilla Hazelnut, Hazelnut Cream, Hawaiian Hazelnut, Cinnamon Hazelnut, Chocolate Hazelnut and many more. The tradition of flavoring coffee with hazelnuts comes from Alpine monks who used to crush pieces of the nuts, plentiful and economical at the time, in their coffee to make it tasteful.

Over 40 percent of the tree nut in the U.S. is eaten in cereals and desserts. This year, the Sweets and Snacks Expo in Chicago revealed the five trends to watch in 2012, one being Chocolate/Nut Spreads. In the dessert industry, chefs are now including hazelnuts in a multitude of dishes, taking advantage of the delicious flavor that can complement many kinds of simple dessert recipes. Because hazelnuts can be roasted or raw, chopped, sliced, or used whole, they add a lovely crunch when you add to confections. They can also be used to make praline, or be combined with chocolate to make ganache, truffles or even a nutty chocolate mousse.Hazelnut spreads also work well in baking and as a substitute for peanut butter. The chocolate hazelnut flavor is not overpowering, but it is unique enough to make anyone eating the treats take notice.

As a result of this industry expansion mode, the hazelnut industry is growing. According to the Oregon Hazelnut Organization, as the hazelnut’s popularity grows, so does U.S. hazelnut production. The U.S ranks third in production with 7 percent after the European Union (13 percent) and Turkey (80 percent). There is no denying this is a growing culinary flavor that businesses should take advantage of, as today’s popular peanut could be the hazelnut tomorrow.