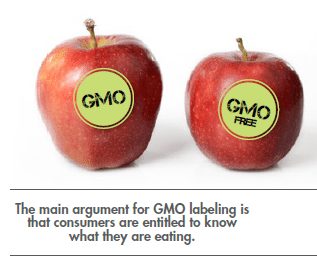 What does “GMO” stand for? According to The encyclopedia Britannica, a genetically modified organism, or GMO, is an “organism whose genome has been engineered in the laboratory in order to favor the expression of desired physiological traits or the production of desired biological products.” In other words, the organism’s DNA is altered in a way that does not naturally occur. While the use of genetically modified organisms has allowed for enormous advancements in biological and medical research, aiding in the development of treatments, cures and vaccines for a wide range of diseases, the main controversy and growing concerns of the public are about the safety of using GMOs in food production.

Are GMOs Safe? The Debate. 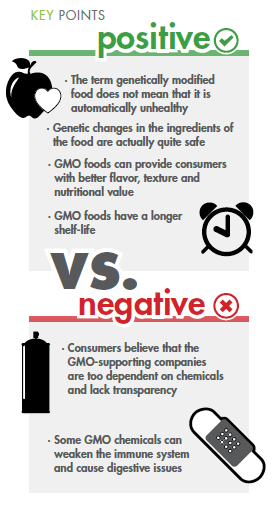 GMO supporters insist that the fact that a GMO food is genetically modified does not mean that it is unhealthy, and that the genetic changes in the ingredients of the food are actually quite safe. According to monsanto, an agricultural biotechnology corporation and the leading producer of genetically engineered seed and glyphosate, farmers began growing biotech crops in 1996, and these “plants and crops with genetically modified (m) traits have been tested more than any other crops – with no credible evidence of harm to humans or animals.” They stand by their belief that the uses of these GMO crops are full of positive outcomes. The main reasons for agricultural GMO use are to create: 1) crops resistant to weeds, pests and disease; 2) larger yields through more efficient land use; 3) foods with better flavor, texture and nutritional value; 4) foods with a longer shelf-life; and 5) the opportunity for a sustainable way to feed the world.

Opposition to GMO use in the food supply stems from the belief that GMO -supporting companies are too dependent on chemicals and lack transparency, leaving consumers in the dark about the foods that they are ingesting. As reported by online news publisher multi Briefs, glyphosate, the main herbicide used, kills every plant it touches with the exception of the GMO fields that are modified to be resistant to the chemical. The non-modified plants absorb the glyphosate, which attacks the plant’s immune system with an AIDS-like condition, making it susceptible to disease from the soil pathogens, and thereby causing it to die from infection. The genetically modified plants are resistant to this herbicide, yet they still ingest and store the glyphosate. This chemical then becomes part of the plant internally rather than residing on the outside where it can be washed off. The fact that it is stored on the inside means that the fruit of the plant and its contained seeds also carry this chemical. Once the chemical is ingested by a human or an animal, it remains active in the gut, killing off most of the beneficial bacteria, weakening the immune system.

A number of animal studies have been done demonstrating that some potential long-term effects of GMO use in the food supply can lead to a weakened immune system, intestinal complications and possibly cancer. The Journal of organic systems published a new study by Australian and U.S. researchers, comparing pigs that eat genetically engineered (GE) feed versus non-GE feed, suggesting that we might be overlooking health problems associated with the use of GMO technology in crops that both livestock and humans consume. With the physiology of pigs being the closest of vertebrate animals to human physiology, “the findings here are of particular significance for potential impacts on human health,” explains Warren Porter, PhD, professor of zoology and environmental toxicology at the University of Wisconsin, madison. The research showed that the pigs fed with GE feed were much more likely to suffer from intestinal inflammation, immune system complications and conditions that could signal cancer or affect fertility. Porter says, “It is important to remember that if immune function is being affected by GMO crops, it is also highly likely that endocrine and neurological functions are also being impacted, because those three systems interact with each other in multiple intricate ways.” With findings like these GMO opponents believe the public deserves to be aware of the possible problems caused from using these chemicals and ingesting these foods.

Should There Be a Standard for GMO Labeling?
Another debate in the world of GMOs is whether or not GMO foods should be labeled. The main argument for GMOs labeling is that consumers are entitled togmodebate know what they are eating. This is not a new argument by any means. Not only do we currently have ingredient lists telling us what is in the food we are buying, but we also label contents both good and bad from trans fats (bad for you) to fiber (good for you). However, the FDA does not support the idea of labeling GMO foods based on the idea that these foods are not materially different than non- GMO foods. They state that, “the agency believes that the practices and record keeping that substantiate the ‘certified organic statement would be sufficient to substantiate a claim that a food was not being produced using bioengineering.” A problem GMO opponents have with this stance is that it does not take into account GMO -free products that are not “certified organic” or organic crops that are contaminated by GMO crops due to uncontrollable cross-pollination. This debate is ongoing and headed to Washington D.C., as over 1.4 million GMO labeling advocates are pushing for something to be done. In 2013, 26 states considered some form or another of a GMO labeling bill and 64 countries already had GMO labeling standards in place.

The Takeaways
Whether you support or oppose the agricultural use of GMOs there are a few important things that we can all remember: 1) Genetic modification is a tool that like any other can be used for good or bad; 2) It is our responsibility as consumers to stay informed of the issues and be proactive when it comes to our health. If you have concerns, then it is your responsibility to do your due diligence to find out where your food comes from and how it’s produced. It is possible to avoid GMOs in food by cutting out processed foods and buying organic; 3) Transparency is key. Allow consumers to be aware and give them the chance to make informed decisions. There are some smart companies who are recognizing that in the long run more disclosure than less is what will keep customers coming back. After all, who doesn’t appreciate honesty?