The world of food and beverage is bursting with flavorful innovation. From new flavor profiles to trends that continue to expand today’s standard foods are getting a real flavor

makeover. Even if flavoring is nothing new, the growing trend of infusing flavor into everyday products such as water, milk, teas and other beverages is on the rise. The trend doesn’t mean the end of baseline products as there will always be a market for the “purists,” but it does mark a new direction for simple foods. Food manufacturers are challenged with a need to develop creative and unique flavor combinations with a wide range of infusions, from traditional to ethnic favorites.

A LOOK AT THE TREND
The trend of flavor fusion isn’t new but is significantly growing within the category of everyday consumables – items we eat and drink on a daily basis. Coffee and teas, for instance, have been flavored for many years with popular flavors such as hazelnut or French vanilla for coffee and lemon or mint for teas. But nowadays, everyone is looking for unique and exciting blends that have never been seen before. John W. Buckner, vice president of marketing at S&D Coffee and Tea, shares, “Consumers always want variety. Our tastes are not homogenous. Flavors and infusions add a wonderful dimension to our favorite foods and beverages.”

The trend is especially interesting for food manufacturers, as it reaches a wide range of demographics, from children to grown-ups. Flavorings for essential products are an asset for parents, providing a fun snack for kids and a new way to enjoy products. S&D’s recent launch of MilkSplash – a milk flavoring which comes in five different flavors – provides parents with a solution to give their children their daily source of nutrition: “The melding of flavors makes meal or snack time more fun,” adds Buckner. More than just for kids, MilkSplash is enjoyed by the whole family, as “adults need calcium and protein just as much as kids and they use milk at breakfast, at snack time and as an after-fitness recovery drink.”

FLAVORED PRODUCTS BY CATEGORY
Let’s face it: “basic” products are just not a favorite in North America, especially when it comes to products such as water, tea, coffee or yogurt. After actively developing new flavors for the snack category for many years and foreseeing the growing interest of consumers for healthier and nutritional products, food manufacturers have started to target the most common foods, which happen to be a very profitable business. While natural flavors are a big trend across the entire beverage industry, each beverage category carries its own flavor trends depending on the product’s application and audience. For instance, the water and tea categories tend to feature superfruits or exotic fruit flavors while coffees tend to feature more nutty, indulgent and comforting flavors.

Flavored H2O
According to the Wall Street Journal, about 20 percent of Americans dislike the flavor of plain water. Growing health concerns are thwarting people from consuming carbonated or artificially flavored drinks, pushing them to choose flavored water insteadA new market report published by Transparency Market Research highlights the prospective growth in this category. The report shares that the global flavored water market was valued at $17.2 billion in 2012 and is expected to grow at a compound growth rate of 11.5 percent from 2013 to 2019, to reach an estimated value of $36.7 billion in 2019. Rated a Top10 beverage brand, MiO is one of the mainstream products in the water flavor category, with an 87 percent growth in 2012. In addition to providing flavoring to water, MiO also enhances the taste with 0 calories, 0g carbs, no sugar and low sodium. Other companies like Herbal Water are coming up with flavored water lines that provide a more sophisticated approach to flavor with varietals such as MintVanilla, Cinnamon Orange Peel, Ginger Lemon Peel and Cloves Cardamom Cinnamon. Just like wine, the company shares info on specific pairings for certain dishes.

Flavored Milk
Flavored milk is the second most widely consumed liquid dairy product after white milk, and consumption is expected to increase at a compound annual rate of 4.1 percent between 2012 and 2015, increasing from 17 billion liters to 19.2 billion liters. According to Tetra Pak, global consumption of flavored milk is expected to grow at double the rate of white milk between 2012 and 2015. Overall, its consumption is being driven by the desire for nutritious and healthy food, and “on-the-go” convenience. Consumers also express the desire to try new beverages and to find a new way to indulge.Almond and soy milks, which represent the top two most popular dairy alternatives, don’t escape the flavor makeover, with most brands offering sweetened versions including chocolate and vanilla.
Flavored Coffee & Tea 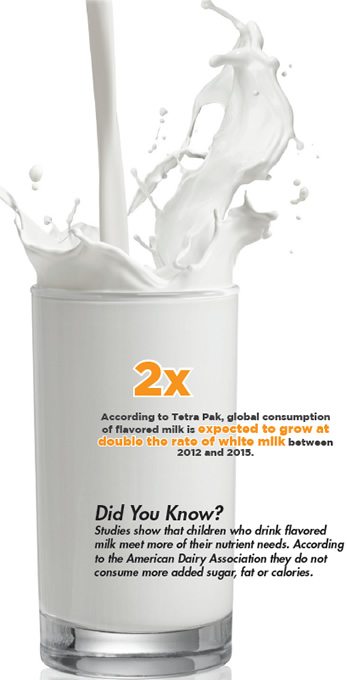 Worldwide, flavorings represent a multi-billion dollar industry, and flavorings for coffees and teas represent a healthy percentage of this revenue. Every coffee and tea flavor imaginable has invaded stores and websites, from the classics such as vanilla and Irish cream to interesting new flavors calling for adventure such as baked Alaska blackberry cobbler. An interesting find is that even if people are increasingly drinking flavored coffee, brands will have a more difficult time reaching the purists since the best coffee beans are rarely used to make flavored coffee.

Last year, Americans consumed well over 55 billion servings of tea, or over 2.5 billion gallons of hot, iced and ready-to-drink (pre-bottled) tea beverages. If hot blends hold the most variety of flavorings, infused iced tea is also a popular trend, with peach being a favorite among consumers. Available in powder forms, as well as premade bottled versions or tea bags, there are many iced tea solutions for all tastes.

HEALTHY SNACK OR SUGARY TREAT?
When it comes to flavoring, consumers often question the health attributes it adds to the products, especially when infused in common foods that establish the foundation of a healthy diet. The challenge for food manufacturers is to find the right balance between indulgent and healthy elements. It is not surprising that with more mass-marketed natural products on the shelves, flavor providers are seeing a growing demand for natural solutions. Most of the time, consumers are seeking sweetness without the sugar. Buckner says, “It goes back to emotional need. Sometimes we drink to quench our thirst, at other times; we drink because we feel a need to indulge. Health is a factor that enters into every choice.”

Despite some healthy skepticism and a campaign started by the Jamie Oliver Foundation against flavored milk at school, research reveals that there isn’t strong evidence that unhealthy choices are made when consuming flavored products. For instance, a study conducted by the American Dietetic Association found that flavored milk drinkers had higher calcium and nutrient intakes compared to nondrinkers but did not have a higher intake of added sugar or total fat. Ultimately, with all foods, there is room in the market for both healthy and indulgent options based primarily on consumer preference. And if both can be combined, it’s a win-win for the end user.

POPULAR FLAVORS
Dairy-based beverages such as drinkable yogurts and smoothies often feature more traditional flavors, such as strawberry, chocolate or vanilla. Overall, though, most beverages are more likely to utilize exotic flavors and garden-fresh aromas, flavored with herbs and floral ingredients. Manufacturers are seeking interesting flavors, including spic, ethnic and blended fruit flavors.“We see a lot of fruit combinations, sometimes with botanicals over different tea bases. For instance, we showed Pineapple Mango Yerba Mate, Hibiscus Mint Green Tea, and Watermelon Pear Green Tea this year at the National Restaurant Association Show in Chicago and couldn’t keep our dispensers stocked the demand was so high,” says Buckner. Recently, Synergy Flavors developed three exotic flavors: Caja, the fruit of the cashew tree, dragonfruit, which is popular in Southeast Asia and jabucltaba, a berry-like fruit that grows in Brazil. Flavor fusion somehow implies the acceptance of new fruits and spices or herbs into the market. “As we travel and form friendships with people who are from all over the world, this melting pot of culture is created that brings new flavor into our palates” adds Buckner. Blending something unheard-of with something familiar is a subtle form of food becoming more global and ultimately more flavorful.

The steadily increasing flavor market is both a result of consumers looking for exciting, adventurous and healthier tastes, and a way to break routine and indulge with everyday food. Each product category has its own flavoring style, from classic and ethnic to comforting, but the lines are quickly becoming blurred as demand for new tastes grows. Manufacturers that recognize the future profitable outcome for flavored common foods are leading the way, and showing no signs of slowing down.