From rich purple hues to radiant yellows, this year’s trending dessert colors fuse rich tones and nature into edible masterpieces. With the increasing popularity of desserts, consumers have pushed for more colorful and innovative options in food. Consumers want to have a sensory experience with their food, and that typically begins with sight. The color and presentation of food can automatically create a perception and alter the eating experience.

“Color plays a key role in food choice by influencing taste thresholds, sweetness perfection, food preference, pleasantest and acceptability,” according to Elizabeth Pelofske in her recent Prepared Foods article, “Cleaning Up the Color Conundrum.” As a result, dessert makers have the challenge to channel their inner Picasso to offer eye-catching desserts in an assortment of engaging shades. This year, four color swatches make the list as 2014’s trending dessert colors.

Pleasing Purples
Every year, Pantone®, the world-renowned authority on color, selects one hue that stands above the rest. This year it is Radiant Orchid, a blend of fuchsia, purple and pink undertones. “The color emanates great joy, love and health,” states Pantone®. With its magical and empowering appeal, the dessert industry has been very creative with this tone of purple, pairing it with other sister shades such as pink and red. Offering desserts that boast a wide range of the same color is key, but more important is that the color reflects the flavoring. Consumers have preconceived notions of flavor just based on the color of the dessert they are about to consume. Ignoring this fact can result in a major dessert failure, say if a dessert is orange yet carries the flavor of banana, which is typically thought of as yellow.

The best desserts for incorporating color into are French macarons. Known for their airy outer shells and sweet chewy centers, the bite-sized cookies are abundant in today’s pastry display cases and appeal to many based on their presentation. Consider creating macarons in a spectrum of eye-catching purples with fruit filling in the same color scheme.

Naked cakes are another trending dessert where infusing purple notes is simple and easy. The absence of frosting allows businesses to showcase layers with organic touches such as flowers and fruit. Other novelties such as cupcakes, cake pops and lavender-inspired ice cream scoops have been trending in this color family, as well.

Purple also fits nicely into the health-conscious fruit phenomenon, turning dessert into more than just an after-dinner treat. The rekindling of fruit with dessert is a driving force behind the consumption of berries, and therefore purple-themed desserts. According to
Nation’s Restaurant News, blueberries have “exhibited the strongest fourth-year growth among berries on dessert menus.” The incorporation of vivid purples with hints of blue has been an inspiration for many dessert makers who seek to combine natural elements into artistic desserts. Contrasts of purples are popping up in verrines, cheesecakes and mousses, each which show-off intricate layers with well-paired fillings. The appeal of these desserts is not only in the fruit, but in the contrast of ingredients with similar pigments. In the purple family, berry cheesecakes are being garnished with violet glazes and dark blueberries. The contrast can just as easily be created in dessert layers. Common ingredients worked into verrines include cherries, lavender, lychee and rose syrup. As U.S. Foods explains, “The dessert menu is the place where fruits from the region can shine, either as a central ingredient or as a sauce of garnish.”

Harold McGee, author of “On Food & Cooking,” believes that the key to creating a flavorful masterpiece lies in the cohesiveness of its ingredients’ colors. He groups them according to pigment, with the idea that ingredients which share the same chemical makeup should technically pair well together. Berries, which fall into Harold McGee’s red and purple pigment family, have been vastly utilized in pies, cakes and puddings. These classical desserts are being revamped with swirls of strategically paired fruit and decadent berry sauces. 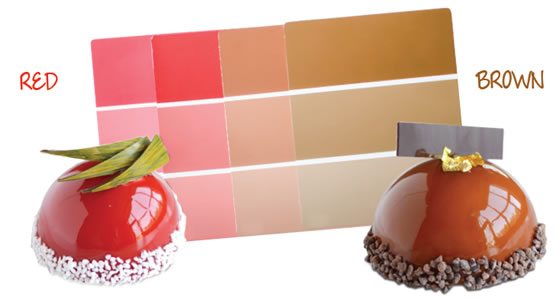 Reds that Marvel
Nostalgic desserts have made a comeback, and red is the predominant color. Known for its energetic appeal, it is also associated with ripe and sweet ingredients. From old-school cakes and cobblers, to a fascination with tarts, red is trending. Not just reserved for cakes, red velvet is appearing on more menus across the country than ever before. According to research from Datassential, “Red velvet appeared on 23 percent more menus in 2013 than 2012, and its mention on menus has grown by 500 percent.”

Restaurants and pastry shops around the globe are cashing in on this trending color and flavor, Panera, for example, offers a red velvet cupcake, and both Dunkin’ Donuts and Sonic have offered seasonal items. This year, there has been an increasing popularity in red velvet pancakes, smoothies, donuts, cupcakes and even Pop-tarts® drizzled with an assortment of red sauces and toppings.

An extension of the berry phenomenon is the lure of red fruit. Tarts, crepes and mini desserts with red fruit have been booming. According to Food Network and Culturewave’s trend analysis, these desserts are popular in strawberry, cherry, cranberry and jam-inspired flavors. Garnish them off with fresh fruit in lively shades of red. New to this dessert category are fruit-filled hand-pies, which are part of the Food Network’s 2014 dessert trends.

Sultry Browns
Browns are a popular color option, eliciting feelings of warmth and richness as well as producing an upscale feel. “A more sophisticated audience prefers more subtle, natural colors,” says Erin Evans, research and development technologist at PreGel AMERICA, who emphasizes the importance of considering your audience when choosing colors. Natural tones can be easily obtained through the use of chocolate, a product which is now in high demand.

Euromonitor shares chocolate is a trending ingredient with an expected increase of over 6 percent in 2014 and expected sales of $117 billion. As a result, the need to produce more creative takes on chocolate desserts has risen, and that includes healthy components also. The market has recently seen a hike in chocolate-infused offerings with unusual fruits, citrus, cereal grains and floral elements. Datassential states around 64 percent of restaurants that offer desserts carry chocolate, an increase from nearly 53 percent in 2005.

The leading trend in this group, however, is the combination of dark and white chocolate colors with fruit or coffee. One dessert that stands out is Pastry Chef Abby Swain’s pot de crème, served in New York’s Craft restaurant. As Zagat writer Patty Lee describes, this savory dessert features a unique merger of bitter and floral Guanaja chocolate, brûléed bananas, rum-vanilla ice cream and coffee-steeped cocoa nibs. The contrast of dark and light neutrals makes it unique. 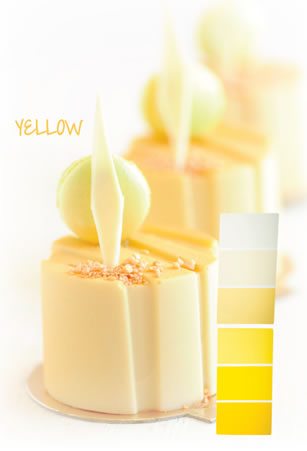 Lively Yellows
With the desire for livelier and bolder flavors, yellow has been a consistent theme carried in desserts. The color is associated with optimism and joy, and is a favorite among international dessert makers. “Inspired by the prevalence of multicultural cuisine, people are expected to continue to seek big, bold flavor experiences in 2014. Sour items in bright colors will fulfill this demand in intriguing ways,” states Mondeléz International’s Trend Report.This doesn’t limit dessert to one shade of yellow. Citrus-infused desserts are making a splash in an assortment of vibrant tones, and paired with sweeter ingredients from the same color family.

“Using color as inspiration doesn’t just mean making a yellow hued dessert because yellow is pretty,” says Pastry Chef Sean Pera. “It’s really about dissecting yellow as a color in all of its forms found in nature.” He adds that dissecting a color opens up a world of possibilities. If designing a dessert themed around the color yellow, for example, he considers all of the other yellow-toned ingredients found in nature like bananas, honey and lemons. The result is an exhibition of ingredients that pair well in taste and aesthetic appeal.

No matter the color, the resounding consensus is that offering desserts with a wide array of similar tones will speak to today’s consumer. Whether it is a dazzling purple or a refreshing yellow, the best desserts stand out not because of a trending color, but by how it is represented in the dessert. The goal, then, is to captivate the palate through the many feelings a color can evoke.