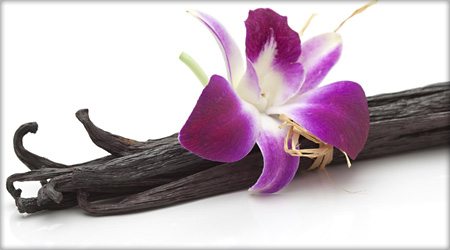 To think of vanilla as a simple, basic flavor is to highly underestimate its complexities and sophistication. From the great lengths we go to in harvesting vanilla beans, to the broad range of flavor intensities and distinct properties, it is clear that true vanilla is fit for the finest of palates. To satisfy the wide range of products that enlist this classic flavor and its aromatic nature, vanilla beans are transformed into a variety of forms to suit the application and make a successful end product. Here are some common types of vanilla flavorings, along with a few tips on their best uses in food preparation.

While over 150 varieties of vanilla orchids exist, merely two species – Bourbon and Tahitian – are used in food and beverage applications. Bourbon beans originated on the Gulf Coast of Mexico and are now cultivated in Madagascar, India and many other areas. When grown in Mexico, Bourbon beans are known as Mexican vanilla beans.1

The flavor and fragrance of vanilla beans vary based on growth region due to soil, climate and curing differences. Regardless of their origin, high- quality vanilla beans should be somewhat shiny and slightly oily with a rich and bold aroma. Beans that are dry or show signs of mold, as well as those with little scent, should be avoided. The entire vanilla bean can and should be utilized to fully appreciate its flavor. To extract the seeds, the bean can be sliced lengthwise and the seeds scraped away from the pod. The pod can be added during cooking for extra intensity, and the beans can be rinsed, dried and reused depending on the initial application. Alternately, sliced or partially used beans may be stored inside granulated sugar or coffee to give a delicate aroma. Vanilla beans have many and often repeated uses, so think twice before throwing them out. Intact beans will keep for a long time when stored in cool (not refrigerated), dark and airtight conditions. If you notice a frosting of whitish/clear crystals on the beans, rest assured they have not spoiled – in fact, these edible crystals are an indication that the bean is of high quality and contains a high level of natural vanillin (the principle flavor compound found in vanilla beans).2 Vanilla beans are best used in sauces, custards, ice creams and other applications where vanilla is the primary flavor and bean specks may be desired.

Vanilla extract is created by percolating or macerating vanilla beans with ethyl alcohol and water, followed by a flavor maturation period that may last as long as a few months. Many producers use a proprietary blend of beans from various regions to create their own signature flavor profile.

While 35% alcohol is the minimum requirement, a higher alcohol content allows for stronger flavor extraction from the beans.3 Additionally, the FDA requires that anything labeled “pure vanilla extract” contain 13.35 ounces of vanilla beans per gallon of liquid.4 In the case that any additional ingredients such as sugars, colorants or preservatives are added, the label must clearly state all contents. Producers of the highest-quality extracts tend to resist adding sugar, and instead rely on longer aging periods to naturally develop flavor since the extract will continue to mature in body and depth for up to two years.5 While single-fold (1x) extract is the standard, some food manufacturers may use double (2x) or higher folds, which means twice, three times, etc., the number of vanilla beans were used in its production. Vanilla extract keeps indefinitely when stored in a cool and dark place – refrigeration is not recommended. Ideal in nearly all varieties of baked goods, vanilla extract flavor is more heat-resistant than vanilla beans. It is also widely used to smoothen and emulsify egg, waffle and pancake batters.

Generally identical in flavor, usage and strength to pure vanilla extract, vanilla paste has a syrup-like consistency with vanilla bean seeds inside.7 Some believe that the inclusion of the seeds gives the paste an edge over traditional extract, while others value the paste for the gourmet appeal that real vanilla bean specks provide in a finished product. From a cost and usage perspective, vanilla paste may be a middle ground between vanilla beans and vanilla extract, as it possesses qualities of both.

As previously mentioned, partially used or cut vanilla beans may be added to granulated or powdered sugar to create a vanilla-flavored sugar. Sliced beans can be immersed into the sugar container and left for a few weeks to impart flavor. The suggested ratio is about 1–2 cups (200–400 grams) of sugar per one whole vanilla bean, and the resulting flavor potency is about one tablespoon of vanilla sugar equaling one-quarter teaspoon of pure vanilla extract.10

Vanilla sugar adds extra flavor to baked goods, beverages and also decorative and garnishing applications such as the topping for crème brûlée.

The favored and highly sought-after flavor of vanilla has been made available for nearly any food application. Because pure vanilla is an expensive flavoring (second only to saffron), it is essential to read labels and understand what you are purchasing. For more information, research the vanilla producers or visit their websites. •••