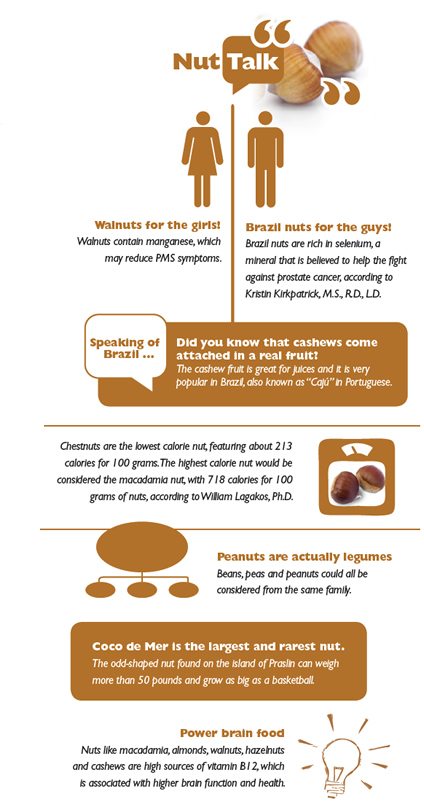 The concept of the nut can be way more broad and complicated than you imagine. We dug deep into the scientific aspect of it not only to find out more about the health benefits they bring to the human body, but also to understand the myths and curiosities about them. Dr. Michael Greger, a leading preventative health expert, mentions one of the studies by Harvard University which examines the association between nut consumption and subsequent mortality. The studies showed that “…nut consumers lived significantly longer whether they were older, younger, fat or skinny, whether they exercised more or smoked, drank, or ate other foods that may affect mortality.” So what is the secret behind this miraculous food?

Seed, Fruit, Vegetable, Legume …
What Category Do Nuts Belong in?
There are essentially three ways to classify a nut. The first one is the botanical approach, which has a more complicated perspective, setting strict biological rules for classification. For this first group, nuts are defined as the single seed in dry fruits, in which the shell does not open on its own to release its seed, like the chestnut for example. In other words, this categorization means that
nuts such as pistachios are exempt because their shell clearly opens naturally, or even with the peanut – which carries more than one seed inside each shell – and is technically a legume included in the same family as beans, peas and lentils. Pecans, almonds and cashews are other examples that don’t fit the mold of this category.

The second approach to defining nuts is a little simpler. According to The Encyclopedia of Seeds: Science, Technology and Uses, which provides more of a culinary point of view, a nut can be thought of as any edible, oily, fatty seed found in a hard shell, or tree nuts as some would call them. This more general interpretation of a nut would include true botanical nuts but also other fruits. It’s important to remember that even in this context, America’s beloved peanut is the one that still stands alone in its legume classification, but it ends up being grouped as a nut because its protein level are very similar to the ones found in tree nuts.

The third definition by the United States Department of Agriculture separates nuts in two groups: one considered as fruits or tree nuts, which includes almonds, pecans and pistachios, and the second group “ineligible commodities,” which includes peanuts, oats and soybeans.

Many non-scientific ‘nuts’ (peanuts, cashews, etc.) have just as much, if not more, to offer in terms of health benefits and nutritious content.

Why All the Health Buzz About Nuts?
Nuts are great for your heart. They are loaded in unsaturated (“good”) fats, such as Omega-3 fatty acids. According to the Mayo Clinic, these healthy fats can significantly lower levels of LDL (“bad”) cholesterol, which reduces the risk of blood clots and circulation problems.

Additionally, the Mayo Clinic reports that the fiber found in nuts helps remove cholesterol from the blood stream, and the Vitamin E they contain assists in preventing the development of plaque in arteries.

Another advantage of nuts is that they are an abundant source of the important building blocks for human function – amino acids. In particular, L-arginine, found in walnuts, Brazil nuts, cashews and peanuts, is known to boost immune function. Almonds and cashews are also top sources of Isoleucine, another essential amino acid that stabilizes blood sugar and increases energy, according to Livestrong.com. Peanuts are rich in the amino acid Phenylalanine, which is believed to better your mood.

What About the Calories?
According to Dr. Michael Greger, a leading preventative health expert, eating nuts can actually help you lose weight. He presents theories like the “Pistachio Principle,” where our body supposedly gets tired of chewing and having to take the nuts out of shells, so you end up not eating as much. Another theory (the one Dr. Greger believes to be more accurate) is the Dietary Compensation Theory. This theory discusses the incredibly filling characteristic nuts have, so when you add a portion of them to your diet, you automatically end up eating less throughout the day. Remember that 90 percent of what people eat in America is unhealthy when compared to nuts, so consumers would be replacing something bad for a handful of nutrition that actually benefits their health. Dr. Greger also shares another theory that says eating nuts can boost the metabolism – helping burn a larger amount of calories throughout the day, and even while you sleep.

It is crucial to remember that although nuts have the “right” kind of fats, they are still relatively rich in calories and that anything in excessive amounts can be bad. For this reason, most nutritionists recommend replacing other sources of fat in your meal – things like cheese or meats – with nuts as a healthier alternative.

The Ways to Prepare Nuts
There are several different ways of preparing simple nuts, and as it turns out, the method of preparation can make a BIG difference in terms of the ultimate health benefits. Generally, nuts are commonly served either raw or roasted. In this case, either preparation is fine. According to Rui Hai Liu, a professor of food science at Cornell University, although roasted nuts can have a slightly higher saturated fat content, in the end the difference is insignificant. More important is to avoid nuts which are prepared with too much added salt, sugar or coatings.

Fortunately, there are countless ways to incorporate healthy raw or roasted nuts into cooking. Adding nuts to salads is an easy way to incorporate them into your diet and make your meal more delicious. Crushed nuts can improve the taste and texture of your casseroles; when placed on top of them the nuts bring an extra crunch to your recipe. Nuts can also make your desserts more nutritious; finely ground nuts can be a great replacement for white flour in muffins, pie crusts and loaves. For instance, if you do opt to use nut pastes in ice cream and gelato, it is recommended that you add an emulsifier and sorbitol to your mixture because nut oils can harden when frozen.

Nut Allergies Can’t Be Forgotten
Be aware of food allergies. According to foodallergy.org,
nut allergies among children have increased three times between 1997 and 2008. Severe allergic reactions to nuts can be fatal, and proper precautions should be taken when dealing with not only nuts themselves, but their oils, butters and other byproducts.

Since most nuts have a similar protein structure, those who are allergic to peanuts are also likely to be allergic to the other tree nuts, as stated by Robin Miller in the article “Nut Allergy 101” for the Food Network online.

Trying to Define a Nut Can Make You Go NUTS!
Even though the concept of a nut is multifaceted, the important thing to keep in mind is that they are extremely healthy food items that are key in various culinary applications.