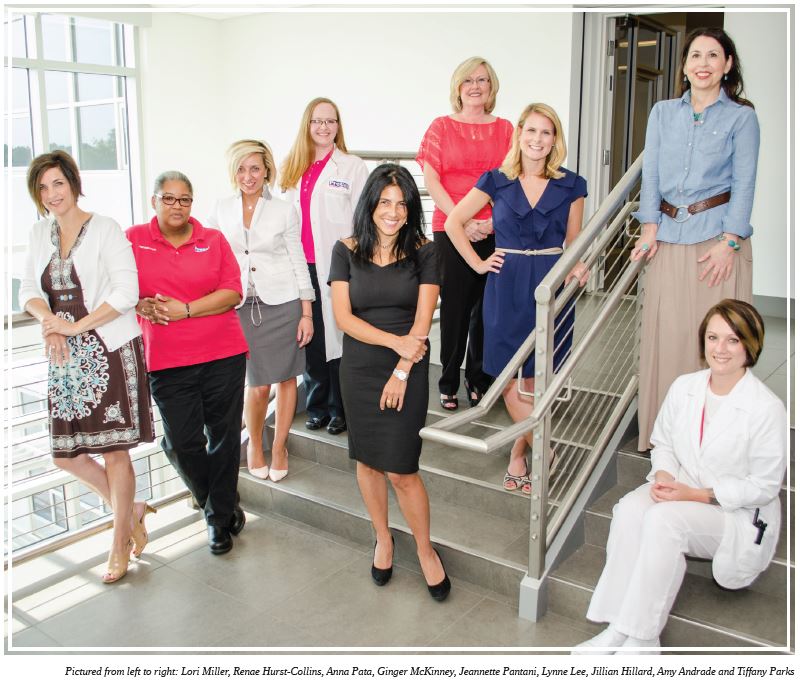 We all know a woman like “her” – intelligent, witty, stylish, talented and well-respected. This type of Renaissance woman is also commonly referred to as “the complete package,” and the women on PreGel AMERICA’s executive team are breathing examples of “her.” PreGel’s army of nine strong-willed females effortlessly exude femininity while firmly showcasing a woman’s keen aptitude for executive-level business, defying the negative stereotypes that have historically branded females as docile, dainty or simply not to be taken very seriously. This proficient collection of female executives thrive at problem-solving, multi-tasking and overall nurturing of their teams and colleagues – all in a unified effort to serve customers and uphold the legacy of PreGel.

“Having a large team of talented, educated women helping to lead this company is a great example of how the world is changing their views on female leadership,” says Marco Casol, president & CEO, PreGel AMERICA. “Respect and diversity are two of our company’s core values. This not only applies to the treatment we offer our customers, but also to our internal structure no matter the gender.”

A myriad of every style of shoe from flats to stilettos are successfully kicking holes through the business world’s ubiquitous “glass ceiling” – a term indicating that professional advancement, especially as achieved by women, is not readily perceived or openly acknowledged. Women are breaking out in all facets of business, including politics, entrepreneurship and the corporate ladder. PreGel’s female force of professional prowess further emphasizes that true leadership is a combination of patience, discipline, will and capability, and should be stripped of a gender-based prefix. With examples of loyalty, smarts and business savvy, each of the women of PreGel offers her views on executive females.

“Women in leadership positions are far less unusual in the U.S. than Europe, and I believe the society’s view is more than positive, in fact, almost encouraging that women are considered as great leaders,” states Anna Pata, director of sales, who oversees a team of 28 professionals, including inside/outside sales and key accounts. “There are many unique qualities that make women’s leadership more effective, and it is wonderful to work for a company that empowers us to be successful in managerial positions,” the nine-year PreGel veteran says.

Director of Operations Ginger McKinney agrees with Pata’s pleasure in working for a company that recognizes women as effective leaders. McKinney, who leads a team of 15 employees composed of maintenance and production associates, appreciates that gender diversity in leadership roles has become more of a priority in recent years. She also concludes that in leadership roles, the most fundamental aspect is confidence that inspires respect, commitment and a drive for a larger more meaningful purpose in one’s work.

“In my personal journey, I have found that you must first identify yourself as a leader and develop your own sense of purpose,” McKinney says. She also emphasizes that drive and ambition can’t be taught, and uses these personal traits to explore new possibilities and concepts, and to take the risks necessary in pursuit of a shared goal. “Opportunity exists and is within your reach if you believe in yourself and strive for it,” McKinney affirms.

Jillian Hillard, marketing manager, concurs that women in leadership positions in the workforce are more prevalent than ever before, and feels a great sense of pride because of it. “For a long time in the marketing world, there were many women staffers but men were generally the ones in leadership roles,” Hillard says.

According to Forbes.com, the National Committee on Pay Equity and liberal groups like the National Women’s Law Center and the National Partnership for Women & Families maintain that women make only 77 cents for every dollar earned by men – an area Hillard sees as an ongoing discrepancy that needs to be addressed to level the playing field. However, the former department of one who now heads a creative force of 14 marketers avidly champions for women to mentor and speak up.

“As a leader in my field, I believe that it is important to encourage and support the growth of other women, to not be afraid to ask for what is fair and deserved based on the role that they are in. I also think it’s important to ingrain ourselves in more associations and serve as role models to the younger generations coming in,” Hillard suggests.

“I’m thrilled with the recognition of women in more powerful leadership roles in business,” shares Jeannette Pantani, subsidiaries special service manager, who seamlessly pilots the responsibility of serving PreGel AMERICA’s six subsidiaries, including PreGel Canada, Mexico, Latin America, Brazil and Colombia. “I think this change represents a maturation in societal views regarding a woman’s ability to lead, and is a great example for the young women about to enter the world of enterprise, as it proves that the sky truly is the limit and gender is no longer a protagonist of opportunity at any level.”

Distribution Manager Renae Hurst-Collins leads an all-male team of eight distribution associates. A woman who replaces words with action, Hurst-Collins easily demonstrates a woman’s supreme capabilities to handle domineering personalities, complicated damage complaints, shipment returns and successful deliveries nationwide in a male-dominated logistics industry. Ensuring the meticulous organization of two product warehouses on the East and West Coast, Hurst-Collins exacts her share of respect among her colleagues and team, further proving that women are very capable of wearing the pants.

Lori Miller, procurement manager, believes there will always be places that have a “good ol’ boy network,” though this possibility does not dilute her hope that society in all facets “will get to the place where a person, male or female, can earn their position based on work ethic, quality of work, leadership qualities, character, integrity … etc.” As a woman in a leadership position, Miller refuses to let any negative opinions skew her executive performance. “I don’t focus on what society deems to be right in the corporate world on whether or not it should be a man or woman. I believe in doing my best at whatever the job may be,” Miller adds.

As sole manager over Human Resources, Lynne Lee embodies a positive outlook about the progress of women leaders in business that radiates optimism, simply stating, “Society has embraced women as a whole to lead and direct many organizations, and PreGel has done the same. This makes it very exciting to think of the limitless opportunities.”

Lee’s positive outlook is one shared by Tiffany Parks, quality assurance manager. In conjunction with leading an all-female food science team, Parks shares a bubbling excitement about the obvious progress of women obtaining positions in the upper echelon of executive hierarchy, despite any natural adversity.

“I believe that women still have to work harder to prove their worth, but society is seeing that women are just as strong and capable as men, and we’re being recognized for it,” Parks states. “I’ve noticed that the food science industry is female-driven, and I believe that due to the rigorous work involved with this field, all people – men and women – are aware that just being here makes you capable.”

Despite their areas of expertise, women have sometimes been trivialized as weak – a notion that Amy Andrade, special service team manager and leader of PreGel’s seven-person internal sales team, still believes exists. “The perception still is that women are too soft to be in a leadership role in a business – that we cannot make tough decisions, put our foot down, terminate employees, etc.,” Andrade reveals. “However, in my experience, I have found just the opposite. Because women, so often, have to work harder to prove themselves in a male-dominated environment, women tend to be extremely strong and often do the difficult tasks that include terminations, tough conversations, etc.,” Andrade continues.

In regard to respecting a woman in a leadership position, Andrade says, “I once had a female boss tell me that if you want something done, you need to get a woman to do it.”

PreGel’s impressive examples of female leadership offer a balance of friendliness and business dexterity that helps the company remain a recognized powerhouse in the specialty dessert ingredient industry. In terms of hiring executive-level individuals to create a winning management team, Casol affirms PreGel’s exemplary strategy with which the company has flourished. “Overall, we focus on attributes such as drive, ability, experience and passion in the individuals we choose for leadership roles within our company. Gender has no bearing on these decisions, but we happen to have an executive staff that is predominantly female – meaning these were the best candidates for the positions they are in.” As the business world comes to fully embrace this philosophy, the women of PreGel continue to be a dynamic example of progress in all respects of business and societal advancement.