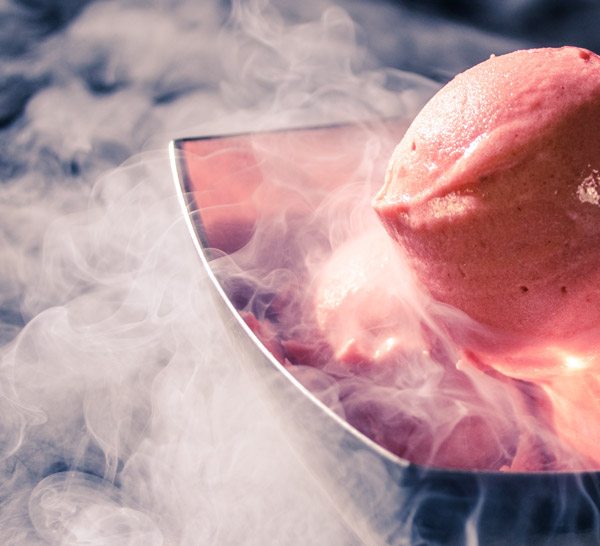 The Vapor of Frozen Dessert Innovation

When most people think of liquid nitrogen, they probably imagine a chemistry lab or a high school science classroom. However, these days, chefs and entrepreneurs around the world are imagining a new setting for liquid nitrogen—the kitchen. Liquid nitrogen is becoming increasingly popular among top chefs who are using this curious, yet natural resource to concoct everything from cocktails to nitro-popcorn. There is no doubt that chefs are pushing culinary boundaries with this new tool, and it is no different in the world of frozen desserts; liquid nitrogen ice cream is emerging from the scene as a new and exciting version of America’s beloved frozen treat.

Besides being one of the most popular dessert trends of the moment, the liquid nitrogen frozen dessert concept has a few other draws as well. With the growing demand for natural and fresh ingredients, liquid nitrogen ice cream fits right in, needing no preservatives, stabilizers, or emulsifiers to create a rich and flavorful made-to-order product. The liquid nitrogen ice cream process also makes for an extremely customizable cup or cone of ice cream; customers can choose their base (usually a standard base, yogurt base, or sugar-free base), flavor, toppings or mix-ins, and even color. The result is a fresh and creamy cup of ice cream that is customized specifically to each customer’s taste. In addition, the process is so mesmerizing to watch that it is sure to draw a crowd.

Even if the concept of frozen dessert via liquid nitrogen proves to be a fad instead of a long-term trend, it seems as though chefs will continue to innovate and discover new ways to utilize this revolutionary technique in the kitchen.

READY TO GET COOL?

Although it sounds like you need to be a mad scientist to make liquid nitrogen ice cream, the process is actually quite simple. Just make sure to take the necessary safety precautions when handling the freezing gas.

What you will need:

Still want to learn more about this trend?
Register for one of PreGel America’s new liquid nitrogen classes at www.pregeltraining.com.